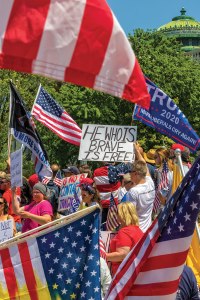 This one is amazing. The amazing thing is that the majority do NOT know what it means. The left goes out of its way to say we’re not exceptional. President Obama even went so far as to say that all countries see themselves as exceptional. I would imagine they do and they should. But that is not the meaning of the expression, the following is:

At our founding, when the Constitution was formed we did NOT establish a monarchy or dictator to rule. We establish a Republic and the ‘King’ in the USA is “WE THE PEOPLE.” That’s American Exceptionalism, we are the  exception to the rule of most countries at that time, they had kings and dictators. “We The People’ then elect Representatives to represent us. We are a Constitutionally Federated Representative Republic. We are not a Democracy as is so often said but a Republic. Democracy would equal anarchy. American Exceptionalism believes in equality for all and the party in power is not unbridled.

We therefore elect different representatives regularly, or at least we should. Obviously this has gone south. We have people in congress for so long they can hardly walk. That’s bad. They’re invested in it and make a lot of money off of it. All of them. Unfortunately we have globalists and socialists that are not that much different from each other and are highly invested in destroying the Republic. Do not think any of them really care for you. Look into their investments. Notice all of the socialists live like filthy rich capitalists. Too many citizens actually believe the socialists care about them and they’re different than the evil overt capitalists. THEY’RE NOT! WAKE UP!

Sometimes we refer to this country as The Great American Experiment. It still is and at times it seems like it’s a failed experiment. Today it’s teetering on the edge. The anarchists appear to be taking over. Will they win? Americans must remember who they are and what they are and rise up and fight back. The government WILL NOT SAVE YOU! You’re their enemy. Hopefully Americans will wake up soon before it’s too late.

And we pray that God is merciful to us all.

Another exert from my wildly popular book OVERUSED.
You can get it before it’s sold out right here.

One thought on “American Exceptionalism • Our Democracy?”