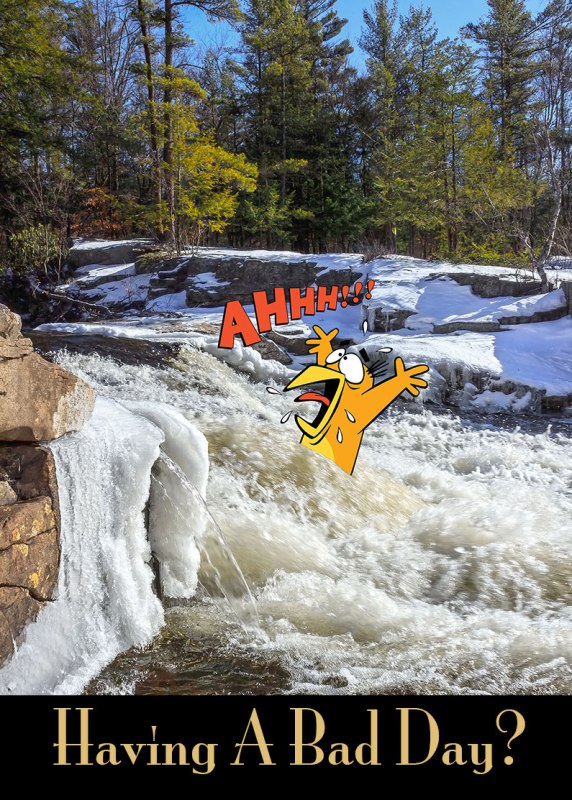 There are bad days and then there are really bad days.

Some people claim they’re always positive and never have a bad day. They tell us they can’t be around negative people. They must live a charmed life with no problems. Some of us would refer to them as delusional. I certainly would.

Definition of delusional:
an idiosyncratic belief that is firmly maintained despite being contradicted by what is generally accepted as reality.

For instance, observe our little friend here. Observe him quickly because he’s about to drown. His day started out very positive. A nice walk in the woods, listening to his little friends singing in the trees, when all of a sudden the bridge broke from underneath his little feet, and he fell into the freezing rapids, quickly going down the proverbial tubes.

Previously he was a pessimistic sort. He was convinced he had a dark cloud over his head following him everywhere he went. Some would call him realistic, but not his friends. They told him, “Look, we can’t hang around with a pessimist. You’re bringing us down and it may be contagious. Be more upbeat or we’re done with you.” Well this hurt his feelings badly. So he tried to look on the bright side of  things. This day he purposely ignored the darkening cloud above his head. When he came to the bridge, he saw that it had a warning sign that said DANGER!

Definition of danger:
the possibly of suffering harm or injury.

But he said, “No it’ll be fine, I’ll just be positive and I’ll surely get across the bridge. My friends will be impressed.” Well, he started across and we know the rest of the story.

Amazingly, as the stupid little bird was drowning he thought,
“My friends will be so disappointed and not like me anymore.”

What he should have thought was,
“My friends are a bunch of assholes.
The dark cloud was real, it burst, and now I’m going to die.”