Once upon a time there was a tiger that live in a zoo. He was bored  because there were no other animals around for him to commiserate with. So it was quite boring. He looked forward to eating, that was pretty much his only exercise, and it broke up the monotony.
He looked out at the people and saw they were bored as well. He thought to himself, “You’re bored? Yeah, we’re all bored. Get over it!” 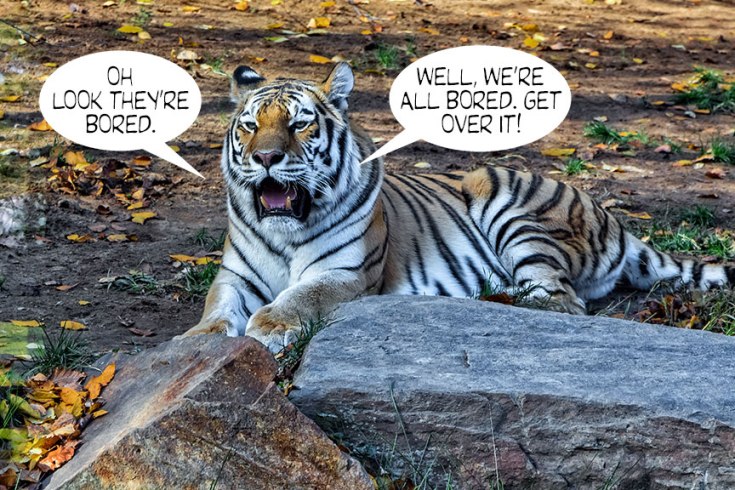 He yawned, and for some reason that excited a little kid. “Look mom the tiger is yawning!” Well yeah, it was the most excitement he had since he paid $18.00 to get in to the boring zoo. Unbelievable, I know. The parents paid $20 a piece and all they ran into were either no animals, bored animals or animals with very bad attitudes. 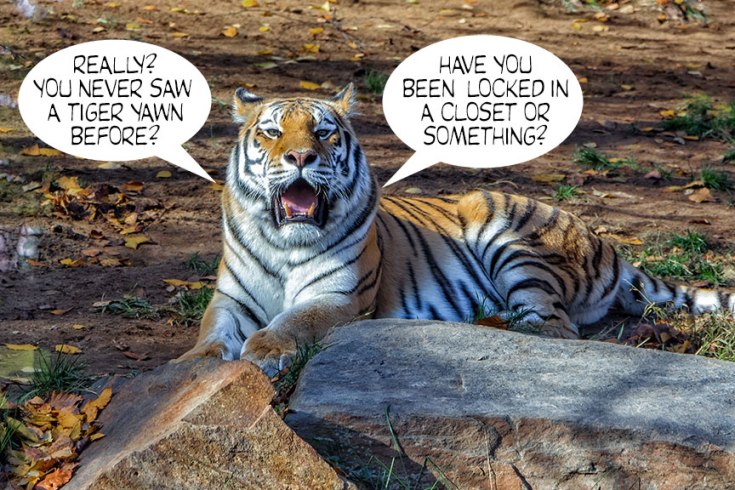 The tiger looked around for some food, his caretaker was a bit late and he was hungry. He seemed to forget that when he came in with breakfast earlier that day, he ate him. That’s right, the tiger ate the caretaker out of sheer boredom and the need to do something different. Well that certainly was different. And we can all relate I’m sure. Who likes to do the same old thing day after day in very small spaces? Although we may not actually eat anyone, well, we probably wouldn’t, maybe. (There was a song from 1970 called “Timothy”. It was about miners that got trapped in a mine and ate Timothy. And then there was Jeffrey Dahmer, he liked eating people. And of course the rugby team that crashed in the Andes. Although they were really cold. But other than that, it’s not for everyone.)
But now the tiger was hungry. He noticed his paws still smelled of the sweet savor of the caretaker. He licked the luscious last taste off of his paws and waited. 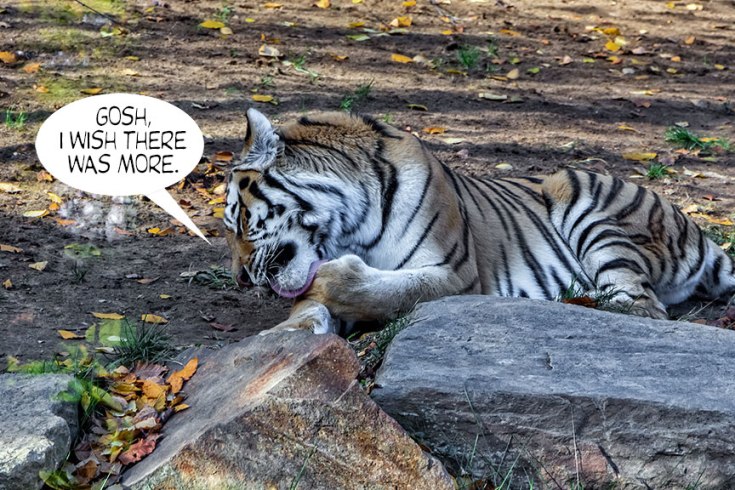 How long would it be before the boring zoo noticed they were missing an employee? How long would it be before he’d get another good meal? Would anyone even notice? Did anyone care? Would the next caretaker have a little more “meat on the bones” if you know what I mean?
How long would the tiger wait?
How long?
Now the tiger is really bored and really hungry. This could end badly. If only the zoo had more animals, he wouldn’t have been be so bored, so unpredictable. But we will never know.
The die had been cast and the caretaker has been digested.

The moral to the story is that zoos should have animals in them.
And if they don’t, it would be better to work elsewhere.
The end.