The Origin Of The Drunken Leprechauns Club 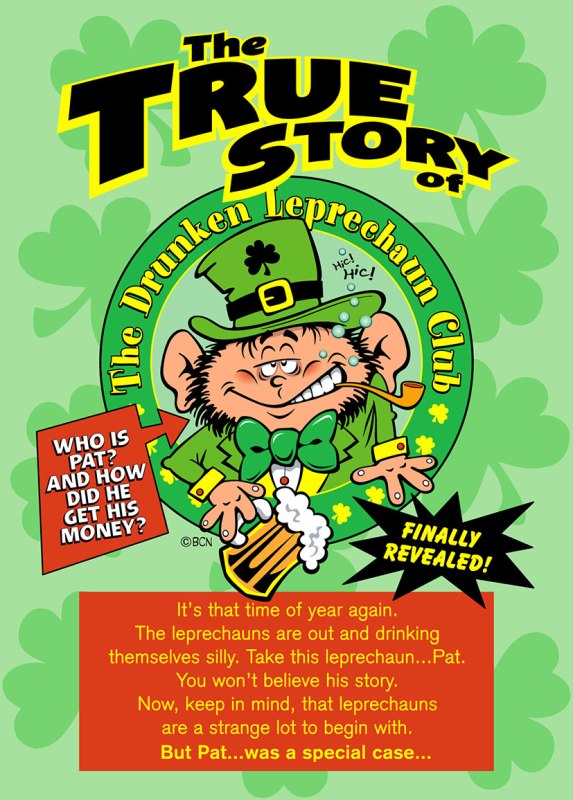 It’s that time of year again. The Leprechauns are out and drinking themselves silly. Take this Leprechaun, Pat. You wouldn’t believe his story. Now, keep in mind, that Leprechauns are a strange lot to begin with. But Pat, was a special case.

Not so very long ago Pat had nothing. This is unusual for a Leprechaun, they are generally very gifted. But not Pat. He didn’t even have beer money. And he hung out with a problematic crowd, banshies, phookas, bogies, and one particularly rowdy hag named Jean, who came to visit a couple times a year (she was very sweet until she had a couple of shots, then the bar usually shut down). But there was one thing that Pat could do like nobody else…he could put it away. Beer, that is. No one, not nobody could out drink Pat.

But one day his life changed. He got in a drinking contest with a very powerful and large goblin. Powerful but simply unaware of Pat’s gift for drinking massive quantities of beer and not even having to pee. (Really and he was barely 3 feet tall.) This goblin’s name was Snotnose, for obvious reasons, and he was a bully and a braggart. He challenged Pat to a guzzling contest and made a promise to give Pat a map to a real pot of gold. He gave proof of its existence and so the contest began. Well, everyone knew that this Snotnose character was in over his head. Pat had quite a reputation. And he drank him into the ground…literally. That’s right, Snotnose dropped dead. He just keeled over. At first, they thought he was trying to get out of the contest. But no, he really dropped dead. So after they toasted his life and buried him, Pat took the map, put together an exploration party, and went off after the pot of gold. After searching for about a week and a half they found it, and it was the real thing. It was overflowing with gold and there was some chocolate there too. “Hmm,” Pat said, “someone had very good taste. It’s from Switzerland.”

Besides his outrageous gift for drinking, Pat had one more gift in abundance. He was generous to a fault. He split the gold and chocolate with the search party. Then Pat took his share and built a club for all of his drunken Leprechaun friends. They had not been welcome in many places. But, now they had a place where everybody knows their names, even if sometimes they were too drunk to know themselves. Of course, no one to this day has out-drank Pat yet. He has a gift. Wherever the beer goes, is a mystery. But Pat’s place, The Drunken Leprechauns Club, is doing very well and their big day is almost here. Pat may be the drunkest Leprechaun that you will ever see, but not so drunk that he can’t wish you a “Happy St. Paddy’s Day!”

You Can get lot’s of the funny Drunken Leprechaun Club t-shirts and gifts at Zazzle.
The Card has the whole story inside. Your Irish friends will love it.