It snowed again. And again. But the whopper of a storm that was supposed to sock in the whole northeast coast fizzled. New England got it bad but the rest of us got a mild snow fall. Amazingly the same people that tell us their models show global warming frying our tootsies off twenty years from now, couldn’t predict the next day. They then told us their models were wrong. Oh! But they’re right twenty years out? Hmm…I think that’s a bit dubious. One weather computer reader covered her bases though, she said we’d have between two and nineteen inches. Well now, she was right! She should get a raise.

Then the brilliant Communist Mayor of New York City did the usual totalitarian thing and shut down the whole city. Never before done. Brilliant and illegal. Hopefully someone sues him. Stopping commerce is unconstitutional. But so is forcing people from their homes with guns in their back, you know, like they did in Boston while looking for the bomber. Why there is not an uprising over these crimes I do not know. We are becoming nation of serfs ruled by overlords. We’d better watch out and seize the Constitution back, by force if necessary, before it’s gone forever.

I did manage to get some shots of Beltzville Lake in Pennsylvania before the snow got dirty. There was this weird aqua color shining out of the clumps of snow. I never saw that before. It was on all sides of us. It was cool so I included a shot of it. 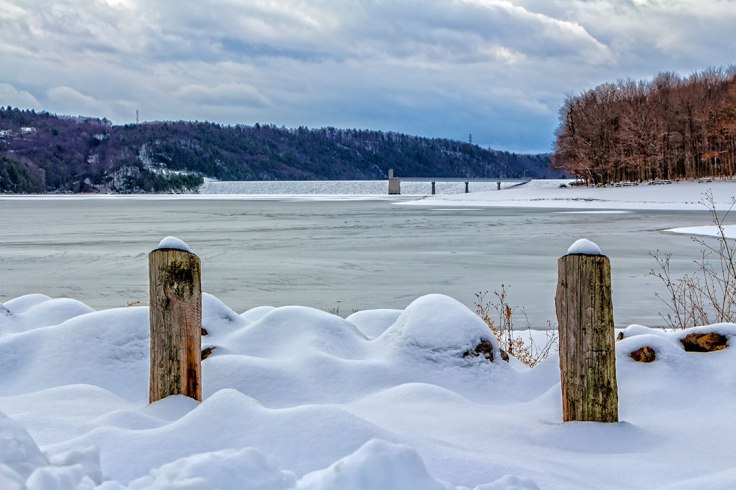