See this bull? He was not a nice bull. He charged me and I literally had to jump back from the barrier. I was minding my own business and he didn’t know me from Adam. And still he charged me. He was a big bull so naturally he was full of bull. It was an upsetting event, but since he was a literal bull, I understood. That’s what bulls do. But you can see why too much bull is a huge problem. He seemed quite mad.

There’s a legend about a cow called Mad Cow.
It goes like this:
The town was full of bull. It was everywhere you looked, and it was more than Mad Cow could stand. (She didn’t get the name Mad Cow for nothing.) “They called me in to clean this place up and that is what I’m going to do.”
Mad Cow looked them right in the eye and stated emphatically, “You’re full of it!” Then he shrieked, “I’ll run you out of town or turn you into fine leather jackets and luscious steaks.”
Well, that was all the bulls needed to hear. They decided to protect their hides and get their butts out of town. “They’ll be none of that bull around here,” Mad Cow proclaimed.
The herd was now calm knowing that there is only one Mad Cow in town, and she takes no bull!

Legends like this explain why animals go all “Animal Farm” from time to time, and possibly how Mad Cow Disease came about. We can understand this. Too much bull is a bad thing. 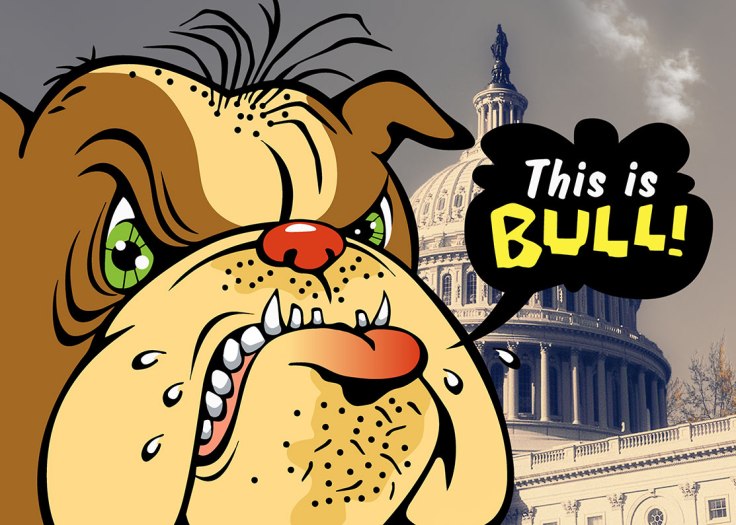 Then there the biggest Bull Factory in the world. It’s in Washington DC. I don’t understand it quite as well. They tell me they like me. They tell me that care about me. They tell me how they will uphold the Constitution. They practically ask me for a date. But in reality it’s all a lot of bull.
Here’s a Bulldog visiting the Capital (it’s really my state capital but they tend to be about the same). Bulldogs look like they know something we don’t know. They look like they know it’s all BS. He looks a little nasty. But he might not be. He could just be sick of all the bull, and he’s mad. Maybe he does’t like his name. Being called a bulldog might make people think he’s the creator of all of the bull. But he’s not. Maybe he just has trouble breathing. That’s the fault of the English. They bred these creatures. Why anyone would purposely breed a dog so it can’t breathe is insane as well as cruel, and it is all bull.

You really have to watch where you step these days. Say the wrong thing and someone will sue you for offending them. That’s bull too. The pop culture world, Hollywood, and the media is full of this kind of bull. They think people are stupid. The politicians really think we’re stupid. We may be, we’re not doing anything about anything. It’s like Animal Farm. We just go along with every idiot thing they do.
Our churches are full of bull these days too. Christ is usually given a mention or two. But then it’s on to our happiness and how to procure it. Christ can come along if He chooses but He’s not required. Or, in some churches that have the facade of being “confessional”, like mine, many pastors know so little of Christianity they keep repeating certain passages from Scripture like clichés. That’s because they have no idea what they believe, they just want to be adored. Again, we may very well be stupid for listening, but it’s still bull.
It’s November and we shoveled snow many times already and people still believe the bull on global warming or “Climate Change”, which simply put, is an idiotic term. The climate always changes. Weather always changes. And Al Gore is still making a fortune selling this delusional bull. That never seems to change.

This weekend my property owners association had an information meeting. A company approached us with the desire to put up a cellphone tower in our field far away from anyone. In a time when many have defaulted on their homes, this bundle of money appeared as manna from God. A true gift. Right? Nope!
The meeting was filled with loons. They pulled out reports from 20 years ago on how we’re all going to be microwaved to death. All this in spite of the “FACT” that “EVERYONE” in the meeting uses cell phones. I even asked one couple that was against it for ‘health reasons’ if they used a cell phone. They said “yes, we just don’t want the tower here.” So I said “Oh, you just want to kill people in other communities just not here.” They were insulted. To me it was logic.
Another woman literally began screaming out that “she’s talking about people’s souls!” Now, I’m a Christian and know the Scripture quite well. I’m nearly certain the Lord gave no instruction on cell phone towers.
These people have had so much bull pumped into their brains they can’t hold on to a coherent thought and exercise an ounce of logic.
How did this happen? How have these people been so messed with? Should we laugh or cry?
Well, for certain, bull costs us money, a lot of money.
Bull really does make people mad.

“When we remember we are all mad, the mysteries disappear and life stands explained.”
Mark Twain
Mark may have been on to something.