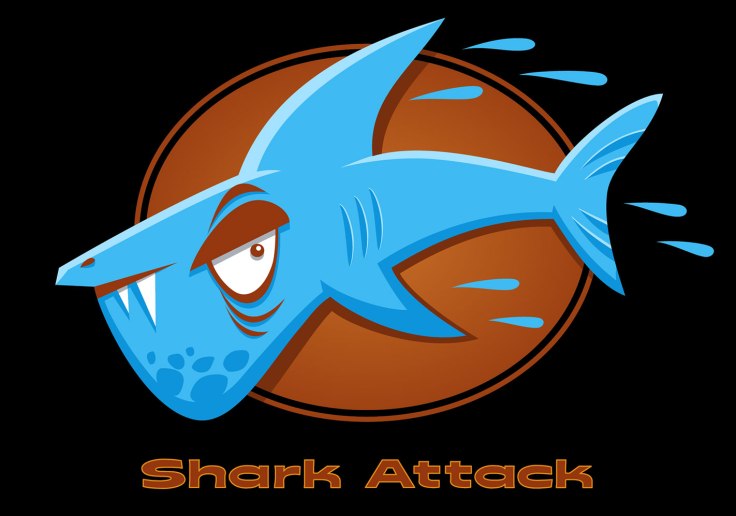 In any case, that was great wisdom a long time ago. This tidbit of info came from a cool song called ‘Mack The Knife’. It originated in Berlin in 1928 but had many versions over the years. The one from1958 is probably the most well-known. But apparently the song wasn’t about sharks at all. It was about a killer, an old-fashioned gangster-type, with a real thirst for blood. He was a robber, murderer, rapist, and arsonist. In short he was not a nice man. Mack’s so-called ‘teeth’ was a jackknife and he was much more dangerous than the often defamed sharks in our oceans. All they do is occasionally bite off a limb or two. I’m not saying that’s nice either but they just do what they do. Humans were given rationality. I know, I know, watching our government and culture in action it’s hard to tell that’s really the case, but it is true. So humans can choose to be rational or not.
Apparently we’re in the age of ‘not’.

But getting back to sharks, blood is big today. The bloodier the movies are, the better. It explains a lot. People don’t care if the blood comes from sharks or gangsters or next door neighbors, as long as it’s violent. But we don’t want violent cops. Most people want cops that give out candy to children, dance, and sing on videos. We certainly don’t want them doing their jobs. People love watching their friends and neighbors get ripped to shreds. They just don’t like cops doing it. They don’t mind shooting each other, just cops can’t do it.
Strange phenomenon.

The glamorization of killing is stunning as long as it’s done by another bad guy. That really is a little insane. As a society we may be mental. It should be something to consider. But if sharks do the killing, the movie is sure to be a hit.

Sharks are a little different from humans. They don’t have cops, they just attack here and there, seemingly indiscriminate. They’re a gang of equal opportunity killing hitmen, or bitemen if you prefer.

Sometimes lawyers are called sharks. Sometimes they act like sharks. I had a good one once when I lived in New Jersey. His name was Bernard. We called him Bernie The Attorney. But he had a real honorable practice. Once they spent an hour on the phone talking me out of giving them business. Remarkable and unusual. It’s not like that where I live now. Some lawyers are not very ethical.

Then there are Loan Sharks. They really do bite with their teeth. Getting involved with them will make you wish a real shark attacked you instead.

‘Jumped the Shark’ became a famous phrase after ‘Fonzie’ went too far to be believed in an episode of ‘Happy Days’. Sometimes surfers really do have to jump the sharks. Sometimes they fail. Well at least we have two of almost everything. Two legs, two arms, we have a lot of fingers and toes. But we only have one head. You don’t want to lose that, although for some people it would be hard to tell the difference. Apparently for some people you actually have to instruct them to use their head. That’s really weird.

Sharks smell blood in the water, so naturally some have related them to zombies. We’re pretty sure that zombies smell blood. They also smell coffee. Although zombies do like coffee almost as much as blood, that still doesn’t mean they’re related to sharks.
But they may be.
Most people are afraid of both sharks and zombies.

My advice is to avoid both of them if possible, since they both bite with their teeth.