There was a short time when a certain group of birds were very famous and in demand. Alfred Hitchcock was responsible for their fame. They were the real “stars” of “The Birds”, an award-winning film from 1963. Tippi Hedren and Rod Taylor received the lion’s share of the fame and fortune, but the birds were the movie. 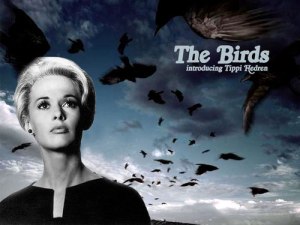 Many times we ask the question “What ever happened to…and you fill in the blank. Nobody ever asks about these underappreciated movie stars. Whatever happened to them? They seemed to just slip off of everyone’s radar. Well, Tippi and Rod were quite attractive so of course they would be remembered. But what happened to the birds?

Dissent is a tricky topic you know. When Republicans are in the majority dissent is considered patriotic. When Obama and Clinton were running for office they both shouted this from the rooftops, “Dissent is the highest form of patriotism!” We’ve all heard them say this over and over. And they were never arrested or chastised because we have the right to free speech. Under a Democrat majority, especially under Obama, it is not only unpatriotic it is illegal and will be crushed with the full power of the government. See, tricky. Obama was for it before he was against it. We’ve heard that a lot lately.
This administration will send the IRS, EPA, ATF, DOD, DOJ, DOA, FEMA, ICE, and any other alphabet that isn’t starring on Sesame Street that day, after you and make you stop saying nasty things about them. They’re very thin-skinned.

In any case Eddy botched things up for them.
But here’s an even bigger secret.
Eddy only knew the tip of the iceberg.

These Hitchcock birds were recruited by the NSA quite a while ago, that’s why no one has seen them star in another movie. They’re part of the new and improved NSA Surveillance System (It’s highly classified). They even submitted to genetic modification. You may ask “why would anyone do that willingly?” Well, they were out of work and there were millions of them. There really isn’t that big of a demand in Hollywood for millions of birds all at once. So they took the NSA’s offer. They were modified to live at least three times as long as their relatives. Their hearing and eyesight were greatly enhanced. They can hear and see for miles and miles and miles. In the sixties there was a rock group that knew this and named their band after them. The government may have had arrested them by now since they were on to something (or, on something, as the case may be).

So if you notice certain birds hanging out at your backyard feeders for extended periods of time, don’t be naive enough to think they just like the taste of the birdseed you selected. And don’t speak against the government within earshot of them, and certainly don’t make any course gestures with your middle finger at any government agent. They’re also very strong, they have no fear and no compassion, and can break that finger right off if they want to.