Zombies have been a big hit with many folks for many years. Young people think they’ve just discovered them and that they freak out older people. They simply have no idea what we were raised on. There really is a reason why everyone wanted to get stoned in the 60’s. We never knew what was lurking under our beds.

But do we really know much about Zombies? As you can see here Zombies are nothing new. Many people think they only eat brains. That’s not true, some eat the whole body as my old copy of Tales of the Zombie proves. EERIE also had good stuff about the undead. They were very informative. I was much more educated than my friends on this subject because I put forth the effort to learn more about this “race” of creatures. I expanded my horizons. Some people just don’t want to study hard anymore. It does explain a lot, but that’s another topic. 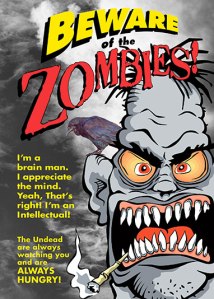 Actually Zombies aren’t that fussy about what they eat, but they’re never really satisfied either. They’re bored, which would explain why they eat everyone in sight. There really isn’t much else they have to do. You know how it is, we’re the same way sometimes. “I’m bored. Ooo that chocolate cake looks good.” “Holy crap! There must be something wrong with this scale. I hardly ate anything yesterday! It was such a light cake, fluffy. TEN POUNDS! It must be water weight! Yeah, that’s it, it’s all water. Shiesh, I almost had a heart attack.”
Hmmm…we’ve all heard that before.

But why are they so unsatisfied?
Through my years of educating myself on this species, I’ve discovered the answer that could have prevented The Zombie Apocalypse.
That’s right! The Zombie Apocalypse could have been avoided.
How you ask?
Coffee!
That’s right, coffee.
That’s all they really wanted.
It’s so satisfying.
If everyone would just stop all of the hysterical screaming and show a little hospitality to these poor creatures, give them a cup of java, and maybe a donut to go with it, everyone would still have all of their body parts. Their heads won’t be getting bitten off just for asking a simple question first thing in the morning at the office. And home life would also improve.
Coffee!
We’ve all known for years it’s health benefits and how much more human we feel after 3, 4, 5 cups of joe. Darn good! And it sure does speed things up, at least if you drink 3, 4, 5 cups of it. No one will ever call you a slow-poke, or accuse you of losing your head over an issue of importance.
Coffee!
It’s almost as good as chocolate, and Zombies really like it.