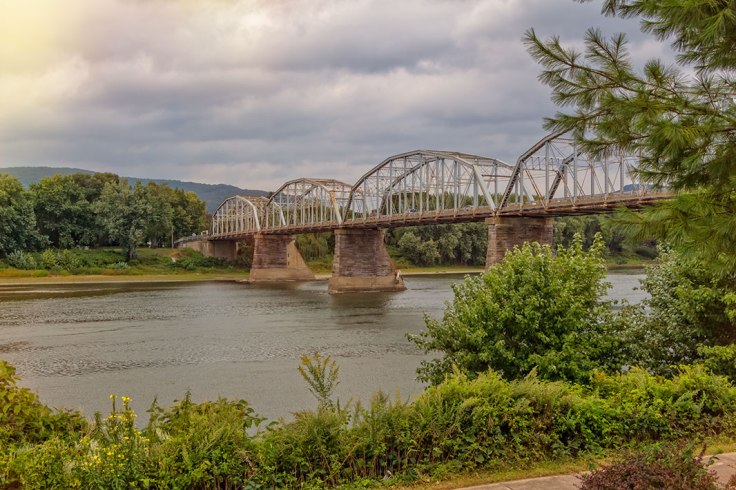 Everyday we need to get from here to there. Sometimes there are big obstacles. These cool wire figures in Pittston Pennsylvania seemed to be climbing over the street and up the wall. I’m sure they’ll make it, they seem to be a determined lot.

Sometimes it’s the need to get through deep or troubled waters. The beautiful bridges in Pittston, Water Street Bridge and Fort Jenkins Bridge in the background, cross the Susquehanna River and make great photographs in any weather. Simon and Garfunkel once offered the same service, but they weren’t as good looking as the bridges, they did sing pretty good though.
The Israelites once needed to get out of oppressive Egypt (still oppressive today, amazing how some things never change). God provided a grand demonstration of deliverance by splitting the Red Sea so they could walk across on dry land. As grand as this was it was just preliminary, a type of the real deliverance from sin that would come when the promised Messiah Jesus would arrive and pay for the sins of the world.
When Christ died and paid of our sins He made us sons of His Father. All bridges remind us that Christ is the One and Only bridge to God since He is both God and man. Pittston has more great reminders of Christ whether they know it or not.

Here in the shadow of these wonderful bridges we found a couple of cool guys looking good in soldier costumes, one in a Revolutionary War outfit and another in a Civil War outfit. The fact that we need soldiers and war at all is because mankind is sinful and need to be rescue from both God and man. Christ has done this. He has saved us from the wrath of God. We have forgiveness now, in spite of our sin, and He gave us the promise of the resurrection when sin is no more.

Of course there is decay to remind us of sin too. Some places are trying to revive and are covered in art to hide the decay and rebirth while it’s in progress. Since the fall of man everything decays, it’s the second law of thermodynamics. I know most people believe we are evolving, but a simple observation of ourselves proves otherwise. Or just watch Judge Judy for a week and anyone with a brain will know that evolution is a crock. Some of these people can barely hold a thought in their heads. Decay of people, animals, and all things is a product of the fall into sin.

Pittston has a lot of beautiful churches. They once proclaimed a gracious Christ that came to be our Substitute. He received His own wrath when He died on the cross, so that we would not. The glory of the Lord shines through the gift of design that created these monuments to the merciful God that rescued us. Some people don’t really need psychiatric help as much as they think. They don’t need to be told they’re okay, since they’re not. Many just need to be told their sins have been forgiven. There is a difference. I don’t know if these churches still preach that or not but I hope they do. If not, I hope they recover, reclaim, and proclaim the Gospel of Jesus Christ for the forgiveness of sins. We’re starving for the Word of God out here. 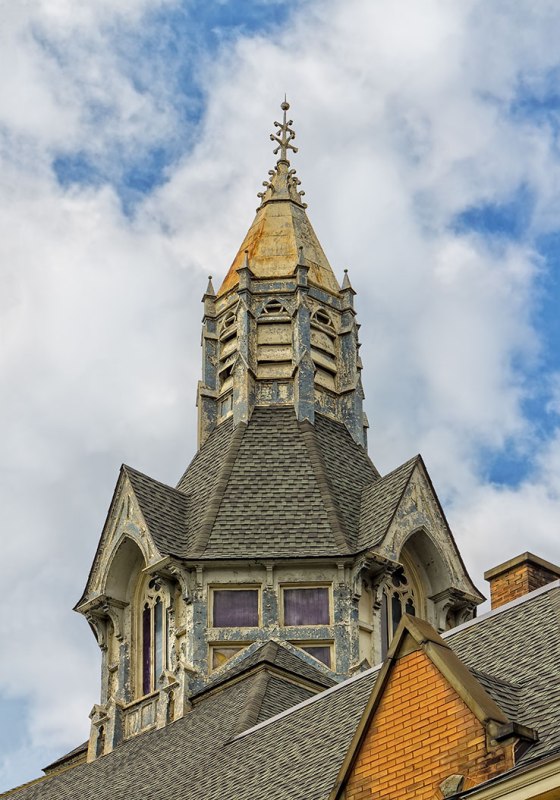 May God be pleased to keep His name preserved and proclaimed in these churches until He returns. While God is everywhere, the Scripture tells us to find Him exclusively in His Word and Sacraments for the forgiveness of our sins and to be sure that He is for us and not against us.
So many reminders of our Creator and Redeemer in one small area of town. And there’s so much more to see.

4 thoughts on “Bridges Get Us From Here To There”