Turning Addiction Into A Plus 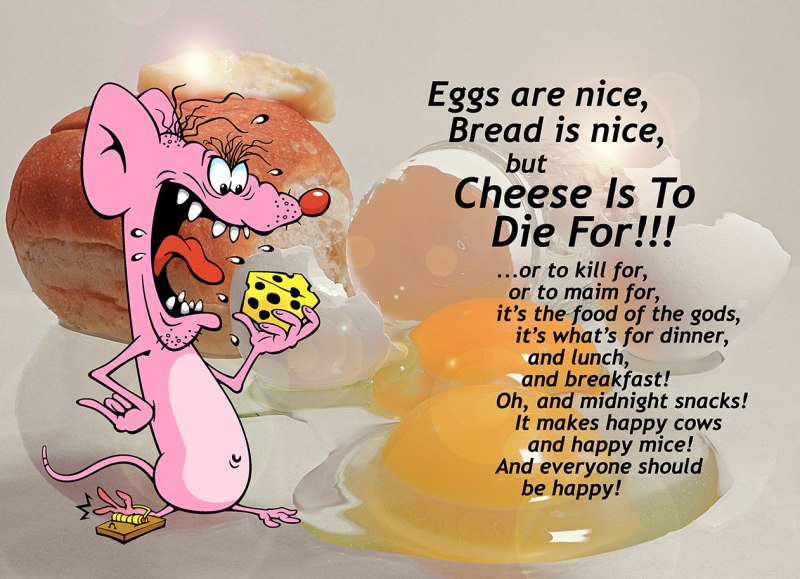 The shame and the stigma of addiction has ruined the lives of many people and their families.
“Anonymous” groups spring up on a regular basis.
Here’s another one to add to the list:
Cheese-o-holics Anonymous

But Cheese-o-holics Anonymous has taken a different track that other groups, which they think will ultimately be more successful. They’ve elevated their status to that of connoisseurs, arbiters of taste, rather than addicts (the Marijuana folks have stolen this idea from them, but Cheese-o-holics Anonymous was first). What a turn of events.
Addicts, that simply can’t control themselves, are now perceived by the public as experts, professionals, literally overnight.

And they do have answers to the deeper questions on the meaning of life, the questions that haunt us at night when we can’t sleep. Such as:
– Cheddar or American? Which is best for burgers?
– What is the proper cheese to have as an appetizer for a pizza party?
– Does the smelly Lindenberger cheese, cause body odor?
– Can you really call pizza, pizza, if it consists of vegetables instead of cheese?
– Does cheese made from reindeer give any ethereal abilities?
– Does Roquefort cheese prevent one from getting sick?
– Why was Miss Muffet so easily dissuaded from her fine dish of expensive cheese?
– Isn’t Gjetost Cheese really just good candy?
– Don’t you think, the people passing off tofu as ‘cheese imitations’ should be put in jail?
– Does any one really know who the original Big Cheese is?
– Why don’t we ever see cows eating their own cheese?
– What do cows have to laugh at anyway?
– Are cows ever really happy about their product? Do they ever say, “I really could have done better?”
– Do cows, sheep and goats ever fight over whose cheese is best?
– Does eating blue-veined cheese cause blue blood to bleed out?
– Who was the first person to cut the cheese? And which cheese was it?
It is amazing how these addicts turned their minus into a plus. They give their deliberations freely, and they really enjoy the gifts that are sent to them in appreciation, cheese gifts of course.

The first council meeting has concluded and they’ve issued their first official declarations:
1-CHEESE IS REALLY THE STAFF OF LIFE
An advertising agency changed that to bread a while back and Cheese-o-holics Anonymous wants to set the record straight. Although cheese does taste good with many breads, so they’re not trying to knock the bread companies, so please don’t send any hate mail.
2-CHEESE IS NOT JUST FOR DINNER!
No sir, it is a fine food for breakfast, lunch, dinner, snacks, gifts, and it is a sleepwalker’s delight (just have it cut up before bed, we don’t want to encourage sleepwalkers to mess around with knives in their sleep).
So they instruct us to eat cheese, and eat it often.
Look at all of the cheese recipes and products we can delight in:
Cheese and crackers
Cheese and wine
Mac and cheese
Cheese casserole
Cheese Doodles
Grilled cheese
Cheesecake
Cheese Danish
Cheez-its
Cheeseburgers
Cheesesteaks
Cheetos
Cheese balls
Cheese pie
Cheese Whiz
Fried cheese
Cheese fondue
Cheese puffs
Lasagna
Mozzarella and tomatoes
Cheese blintzes
Cheese souffles
Cheese crepes
French onion soup
Chicken Cordon Bleu
We really could go on and on forever, or almost forever.
And who wouldn’t want their caring empathetic friends to bestow on them a delicious cheese basket?
Why, cheese is so good that some people wear it on their heads. What other food do you see people doing that with? Bananas? Who’d look like a fool for a banana. Many of Cheese-o-holics Anonymous members are of the rodent family. They actually risk their lives to get to their coveted Gruyère. That’s right. They defy death all for the love of cheese. Would they do that for tofu? Maybe if they’re retarded, because that’s crazy man. Tofu? Euuhh!!

Cheese-o-holics Anonymous has also issued their first directive (not fully a declaration but close enough) instructing us not to believe the claims from the medical associations that say cheese can clog our arteries. We should remember all of the lies that were told to us about eggs. For years they put out propaganda demeaning the poor egg, condemning those that partook. No more than one or two a week they told us. Who can eat one egg? That’s crazy too. We all know now that eggs have never killed anyone. Cheese-o-holics Anonymous thinks we shouldn’t listen to them. No, they think we should follow the lead the rodent community. Death does not scare them. Clogged arteries do not scare them. High medical bills do not scare them. New insurance regulations don’t scare them. Obamacare doesn’t scare them. The government doesn’t scare them. The cat does not scare them!
Because life without cheese is just not worth living.
CHEESE! It’s to die for!

You can get Mouse Loves Cheese poster, cards, stickers and other gifts at Zazzle.