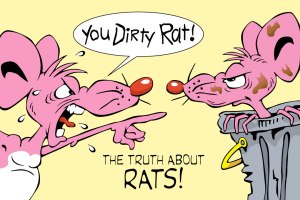 Yes they are! But they have good reasons to be.

As you may know, rats have had a reputation problem for some time. They really could use some better PR. They travel a lot, they’re all over the place, and are not always welcome. Some have even referred to them as ‘kinda creepy’.
Well some of them are kind of creepy (Ben was kind of creepy).

But the road to fortune, or at least to being liked, has had some serious road blocks for rats. The living conditions they inherited, would make anyone cranky, and nasty, and especially dirty.

But these two rats have traveled around together for some time, taking over where the raccoons left off…“ooohhh…a fancy French garbage can, Foie Gras tonight. We’ve hit the mother lode.
What luck!”

They’ve traveled a lot of dirty roads as well as the long and winding road, the tobacco road, the road less traveled, the road more traveled, they even took the road that wasn’t taken. They’ve been on public roads, private roads and most of the time they’re middle-of-the-road. They tried the road to stardom but it turned out to be the road to nowhere. They even followed the chicken across the road but still haven’t found out why she did it. Once they went way off-road following a musical fellow in tights. His flute was appealing but things started to go badly. “Seemed like a cult if you ask me,” they both agreed, “it sure looked that way especially when all of our friends jumped into the river. What do you think got into them?”

But, after years of traveling around to see the world’s classiest garbage dumps, seeking to upscale a bit, they started to develop a serious road rage, some have even referred to them as road hogs.
So they made the decision to call it quits.

“We’re hungry, let’s get off the road, go home and stay put.
We want our own cans tonight,” they both agreed.

As cranky, nasty, and dirty as these rats were,
the road home was sweet.
It always is.

You can get the cool Dirty Rat poster, t-shirt, cards and more at Zazzle.