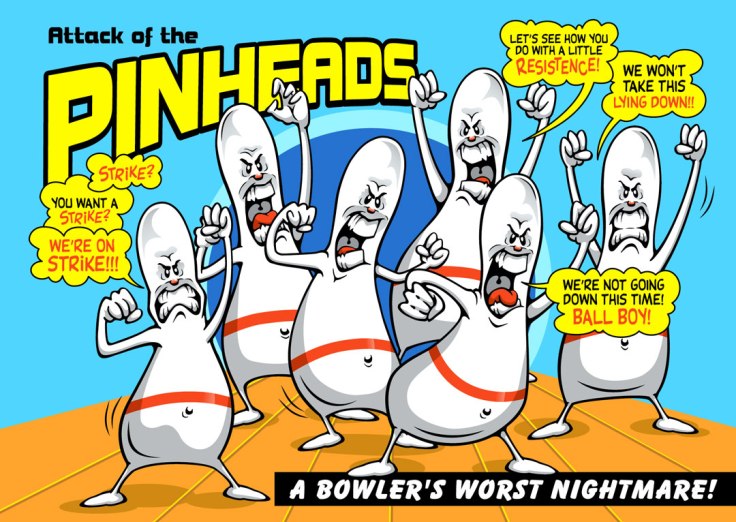 It was late. The game was almost over…almost.
The Pinheads had just about enough. They had one ball too many thrown at them. They had too many names yelled at them. No matter what they did, it just wasn’t good enough. Now was the time for action. They would stage a revolt. They would demand their rights. They would resist the pressure to play ball. They would no longer roll over for just anybody. They were mad and they weren’t going to take this lying down.
“Strike! You want a strike, Ball Boy? We’re on strike!”
“We’re not going down this time!”
“Let’s see how you do with a little resistance!”

Well, you could tell that the bowlers were stymied. They were never spoken to that way before, at least not by Pinheads (Who knew bowlers were such racists?). Sure, there was always some friction. But now, now they had completely lost control. Their center of gravity had shifted. This couldn’t be good. They would now have to watch their backs. The dark alleys were never going to be the same again. There would be grippers lurking in those graveyards, and they would not be the usual suspects. There would now be a new definition of a ‘heavy hit’. There would be no more cheater balls, only cheater pins. The Pinheads would be the only crankers now.
The bowlers were now in deep doodoo and they knew it. Their balls would be D.O.A. They would be hammered.
Yes, a new day was dawning.
The revolution has begun.
The Pinheads have attacked!
And the lights went out.
The bowlers are screwed.

*A bowling dictionary may be necessary for many of the terms.
But in the meantime the Bowling Pinheads are found at Zazzle.